Extreme heat kills. In the summer of 2003 a heat wave in Europe caused 70,000 DEATHS. The very young, the very old, the poor, and the chronically ill, and are the most severely affected. Extreme heat also triggers aggression and increases the number of VIOLENT ASSAULTS, including rapes, murders, domestic violence, and PSYCHIATRIC ADMISSIONS for being a                     danger to others.
HOW HOT IS IT NOW?  Real Time Heat Index
HOW HOT WILL IT GET IN MY LIFETIME?
How hot will it be in 2100? 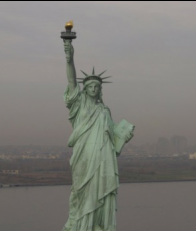 OZONE (smog) forms at ground level when pollutants combine in the presence of heat and sunlight. Ground level ozone increases with warmer temperatures. Helpful up high but hazardous down low, ozone irritates the airways and increases emergency room visits and hospital admissions for conditions like ASTHMA and EMPHYSEMA. Repeated exposure to ozone causes permanent lung damage, especially in children. Increased ozone levels cause INCREASED DEATHS, even when  those levels are below the limit determined safe by the EPA.
HOW'S THE AIR WHERE I LIVE? 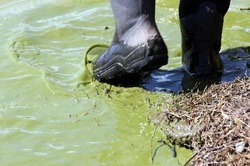 Warmer weather, combined with heavy rain washing more nutrients into rivers and lakes, causes blooms of TOXIC BLUE GREEN ALGAE. Some algal toxins cause DIARRHEA and SWIMMERS RASH but one toxin, microcystin,  causes HEPATITIS and LIVER CANCER. Microcystin is now commonly found in US reservoirs and at the intakes of drinking water treatment plants levels high enough to poison dogs and small children are a common reason for beach closure. 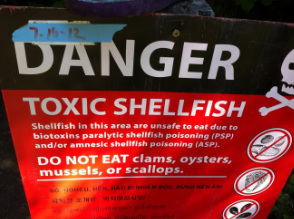 BACTERIAL FOOD POISONING increases with WARMER WEATHER. For every 2 degree rise in temperature rates of SALMONELLA and CAMPYLOBACTER rise 5%. WARM OCEAN water promotes harmful algal blooms called "red tides". The algae forms toxins which concentrate in shellfish. Symptoms of SHELLFISH POISONING begin as soon as 30 minutes after eating and can progress in 2 hours to complete PARALYSIS and RESPIRATORY FAILURE. Some shellfish toxins pass through the placenta from mother to baby causing LOW BIRTH WEIGHT and FETAL BRAIN DAMAGE.

WARMING of seawater also increases the multiplication of VIBRIO bacteria in shellfish. One type of Vibrio just causes DIARRHEA but the other causes BACTEREMIA (bacteria in the bloodstream) which is 50% fatal. Vibrio causes only 20% of shellfish poisonings in the US but is responsible for 95% of deaths.

CARBON DIOXIDE increases the production and potency of plant pollen in causing ALLERGIES.  High pollen levels cause allergy symptoms like itchy eyes and sneezing, and increase the frequency and severity of ASTHMA attacks.
With INCREASED TEMPERATURES, the pollen season starts earlier and lasts longer, and common allergy causing plants and trees are spreading to more areas. Increased CO2 levels have also caused an 8 fold increase in the severity of allergic reactions caused by some common molds.
WHAT'S THE POLLEN COUNT IN MY AREA? 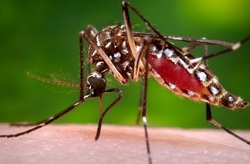 WARMER TEMPERATURES promote the spread of insect borne diseases like WEST NILE VIRUS and DENGUE FEVER Called "breakbone fever" for its high fever and severe joint pains, dengue is now re established in southern Florida, where it infected 5% of the population of Key West.
ticks heading your way?
Mosquito Borne Disease MAP